Posted on September 21, 2016 | Comments Off on Film Artist Profile: The Humbler -Danny Gatton

The film, “The Humbler: Danny Gatton.” is about a  D.C.-based musician whose reluctance to be in the limelight earned him the title “the greatest guitar player you’ve never heard.” My good friend, film producer Virginia Quesada,  is currently-in-production on the documentary about Danny’s life. 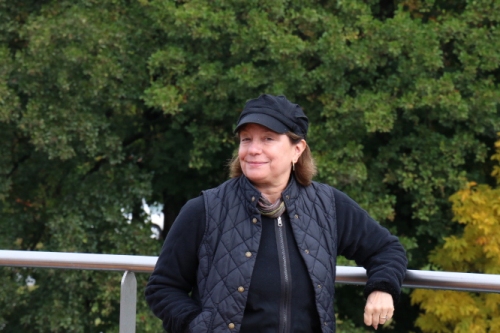 Virginia is an award-winning film producer and editor, specializing in cultural programming and documentaries. She began working on this project in 1989 when she founded Video Culture, Inc., a nonprofit tax-exempt arts organization to make films about artists.

Val:  Virginia, tell me about the film you are producing about Danny Gatton’s life?

VQ:  “Myself and the other Video Culture, Inc. board members just love the work of our local Guitar, Hero Danny Gatton. He was awesome!! Danny Gatton was a big, big guitar hero with a big, big blues story.  We started this project in 1989 before Danny left us. We are  producing the film with the full support of Danny’s daughter, Holly Gatton and his widow, Jan Gatton. “The Humbler – Danny Gatton” is the first in-depth exploration of the life, music, and legacy of a troubled genius. Though he never got the accolades he deserved during his short life, Danny Gatton was quite possibly the greatest electric guitarist who ever lived.
Danny’s had a mastery of blues, jazz, country, rock, and rockabilly styles that was so impressive, other guitarists nicknamed him.”

VQ:  “Throughout the late 80’s and early 90’s, Video Culture taped Danny in performance and exclusive interviews, and we have continued to collect Danny footage. We are ALSO honored by the many people who have shared their Danny material with us. After 27 years, we have amassed an extraordinary archive of Danny Gatton and his awesome musical colleagues – much of it will be new to his devoted and ever-growing fan base.”

Val: What other artist are featured in the film?

“Members of Danny’s family that we interviewed: His mother, Norma Gatton who ran NRG records that published a lot of Danny’s music. Danny’s wife, Jan Gatton and Danny’s daughter, Holly Gatton. Other colleagues – Ed Eastridge from Big Mo Recording studios that did the bulk of Danny’s recordings; Bob Dawson from Bias Studios in Springfield that did several albums for Danny; Jay Monterose who was Danny’s Guitar Tech.”

Val: What impact do you hope the film will have?

VQ: “We will know that our film has had an impact when more people, especially young guitarists, know about and are inspired by Danny’s consummate musical artistry. But the music business is very hard on musicians, and Danny’s too-early death can focus attention on the vulnerabilities of young men and women, especially artists, as they navigate their ways through minefields of art and life. In his all-too-short life, Danny Gatton brought much joy to all he touched both as a man and as a musician. Now, our work is to make sure his legacy continues to inspire music lovers everywhere.Together, I know we can bring Danny’s story to life.
Be part of the team that honors the American Master guitarist, Danny Gatton.”

Val: How can people interested in the film get involved?

VQ: “We are a  nonprofit, tax-exempt arts organization, and we believe that we help bring the work of this extraordinary artist to life. We are getting very close to finishing the movie, and we hope that people interested in the film can help us now. We are live with an Indiegogo Campaign. https://www.indiegogo.com/projects/the-humbler-danny-gatton-movie-film/

Val: Thanks VQ! I’m so looking forward to seeing the finished film!